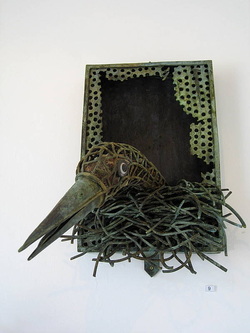 From an early age David Lloyd showed versatility and skill with his hands. His father was a cabinet maker and inventor, and instilled in Dave the desire to work with his hands and to be his own boss.

Dave initially settled in Golden Bay and pursued his interests using wood, leather, glass and metals to produce art and craft to sell in a shop in Takaka.

Eventually Dave found Takaka a bit small after the hustle and bustle of London, so he moved down to Canterbury where he became active making leather bags, shoes and boots.

David had a stall at the Christchurch Arts Centre Market for many years.

In 1997 David studied with the Silversmiths Guild at the Arts Centre in Christchurch which inspired him to further explore working with metals.

This new medium stimulated his creativity and he began to explore.

David has found a form that enables him to turn ordinary substances into amazing depictions of insects and vegetables, birds and fish and other strange creatures that blend the balanced beauty of Art Nouveau with the humor and quirk of Steampunk. From tiny fine brooches to large garden sculptures his work demonstrates an elegance and sense of humor that delights those who are lucky enough to see it. 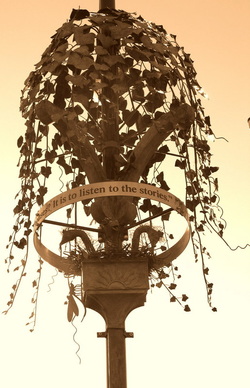 Barrie Street, CHRISTCHURCH
In 2009 David was asked to create a sculpture in Barrie Street, in Addington Christchurch.
The streets in the area are named for famous authors and have artworks themed to suit.
His sculpture is mounted high on a lamp post, and features a bird filled nest of ivy and the intriguing quote from J M Barries' 'Peter Pan' on a scroll of metal, “Do you know," Peter asked, "why swallows build in the eaves of houses? It is to listen to the stories.” 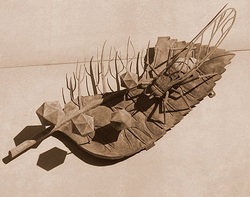 Lincoln University, Lincoln, CANTERBURY
The Agricultural Research Department  of Lincoln University commissioned David to create an external sculpture to be placed on the front of their building on campus.
A giant leaf complete with aphid and virus shapes was made from copper and is permanently attached to their exterior wall.